Select region/language(English)
Everyone Is Creative

Not long ago I was able to meet a few people who actually use the XP-Pen all over the world. These were Nart (a retiree), Szabo (a high school student) and Omar )a cardiologist). Even though they lead different lives with different jobs, and they aren’t all professionals in their fields, they all have one thing in common. They love the joy of painting and the XP-Pen graphics tablet helps them create the things they love.

Nart van Hout from the Netherlands has been drawing for his whole life. Since he’s 71 years old, that means he has been doing it for quite a long time. When he was much younger, and in his teens and twenties, he mainly used pencils for drawing things like animals, cartoons, and for making birthday cards.

Then, as technology changed over the years, by the 1980s he started using a personal computer to draw. Then, he got his first XT-PC, which helped Nart draw things like Mandelbrot figures in a single night. A few years later, the first generation graphic tablet was released, and since Nart loves technology, he decided to buy one immediately. This added much more functionality that helped him tweak his drawings on his computer.

By 2018, Nart had gone through several PCs and graphic tablets over the years. Then one day, as he was browsing the Internet looking to buy a new graphic tablet, he found the XP-Pen Deco 01. It was a mere 8mm thick, very lightweight, portable and it had a very sizeable working area.

Nart was intrigued and decided to give it a try. And then, guess what? The Deco 01 was a fantastic choice for his work. He says, "My work now? I love a blank page. I can grab any brush, head into a new adventure of making something which has never been before."

When you're young, your life seems to have tons of possibilities. Should you be a painter? An accountant? Or maybe or a physicist? As a high school student, Szabo Lasmina's adventure has just started. She loves several things, to include drawing, animation, and math. With a variety of different materials like acrylics, colored pencils, charcoal, graphite, pastels, and watercolors, Szabo creates artworks for side projects, school projects, and even just for fun.

Just like a lot of other teens, Szabo have a tendency to try new technology, such as digital drawing. As of last Christmas, she started to research the possibility of using a graphic tablet.

"I'm still a student ,” she said, “And I wasn’t sure whether I liked  digital drawing. So I looked at all kinds of graphic tablets with high price-performance ratios. I found the XP-Pen and looked at all of its tablets. When it came to deciding on buying it, I was hooked by the elegant red dial design of the Deco 03, so I bought it immediately. Now that I have used it for several hours, I discovered it's really comfortable to work with it, and I am pleased with what I chose."

Omar Mohammed is a cardiologist from Germany. He has a very stressful job since he deals with lots of emergencies. After a hard day's work, he likes to destress at home by doodling. Not long ago, an idea struck him. Why not combine my relaxation and do some pop-science work at the same time?

Omar had a plan to create some educational videos that focused on cardiology. He had everything he needed, except a good graphic tablet. "Drawing and animation is just my hobby, so I needed something more functional and durable, yet not too fancy. Then I noticed the XP-Pen Star 03. It has eight shortcut keys and a reasonable working area, so it met all my needs. I just finished my first video on the causes of heart attacks with Krita and Hitfilm. Now I hope I can use my Star 03to create a lot more medical, educational videos." 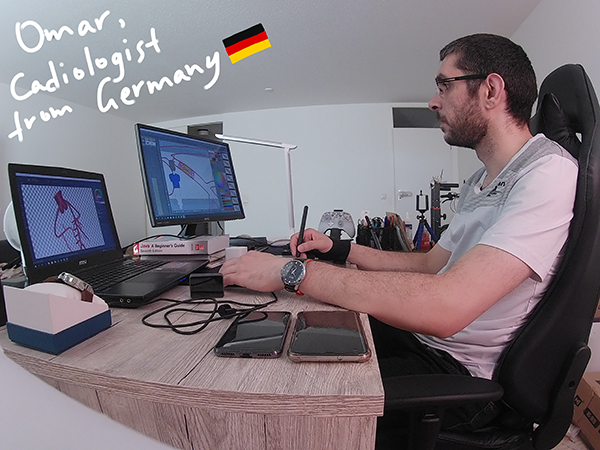